2022 LCK AS wins the Academy League DRX in the second… 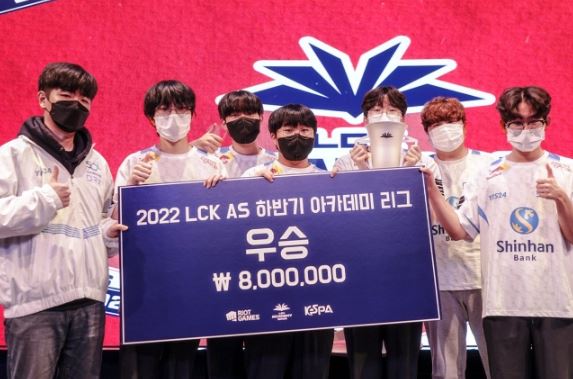 The DRX Academy became the best LCK Academy in the second half of the year. DRX Academy won the final match against DK Youth of the “LCK AS Second Half Academy League” held at Daejeon E-Sports Stadium (Daejeon Dream Arena, Daejeon Yuseong-gu) on the 20th (Sun).

The final of the “LCK AS Academy League” was won by DRX Academy, which showed concentration after a neck-and-neck race to the fifth set. In the last five sets, “Gyeom” Kim Min-gyeom’s Viego and “Paduck” Park Seok-hyun’s Apelios played an active role in every one-shot fight, contributing to confirming the championship.

‘Paduck’ Park Seok-hyun was the MVP of the final. Park Seok-hyun said, “I was able to win because all the team members were good, and I think I got results by studying how to take the lead in the bot and operate it.” It was nice to be able to make my name known in the academy league, and I will show better performance by calling up the second division. “I would like to thank the secretariat officials who take good care of me and the fans who always support me,” he said.

In addition, the “LCK AS Academy League” playoffs were held offline at Daejeon E-Sports Stadium, co-hosted by the Daejeon Information and Culture Industry Promotion Agency, and 250 visitors visited for two days to cheer for the next generation of players.