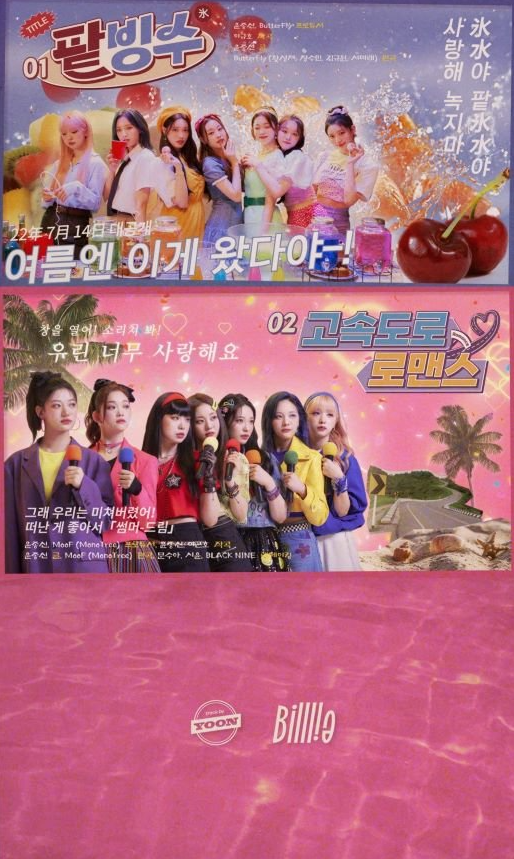 Girl group Billlie has released a preview of the song “Bingsu with red beans.”

On the 11th, the agency Mystic Story posted a track preview video of “track by YOON,” the first album Billlie participated in, on Yoon Jong-shin’s new music project “track by YOON.”

First of all, in the teaser of the title song “Patbingsu,” the retro-emotional phrase and credit notation mixed with Chinese characters “I love you, Patbingsu” and “It’s here in summer!” stimulated nostalgia, reminiscent of advertisement posters and album covers in the 80s and 90s. With the highlights of patbingsu unveiled against the backdrop, Billlie’s bouncy and refreshing voice raised expectations for the reinterpreted “patbingsu.”

In the “Highway Romance” teaser, Billlie members holding colorful microphones were then revealed. In addition, in the highlight of the arrangement, which features a funky base, the refreshing voices of Billlie members led the song to a cool and exciting atmosphere.

Both “Patbingsu” and “Highway Romance,” which were reborn in Billlie’s own style through the production of Yoon Jong-shin, were first introduced through the album “Shadow” in 2001, and the release of the preview version alone highlights producer Yoon’s new attempts in music.

In particular, the two songs reinterpreted by Billlie are in a completely different style from the existing atmosphere, and the production and arrangement of “Bitbingsu” was done by “ButterFly,” a team led by Yoon Jong-shin and composer Hwang Sung-je, who worked with numerous singers as Rain, TVXQ and Girls’ Generation. The track “Highway Romance” was supported by Moof (Mono Tree), who wrote songs by Taeyeon, Chen, Oh My Girl, and (G)I-DLE, which increased the completeness of the album. 코인파워볼

“Track by YOON: Patbingsu,” in which Billlie participated, will be released at 6 p.m. on the 14th.