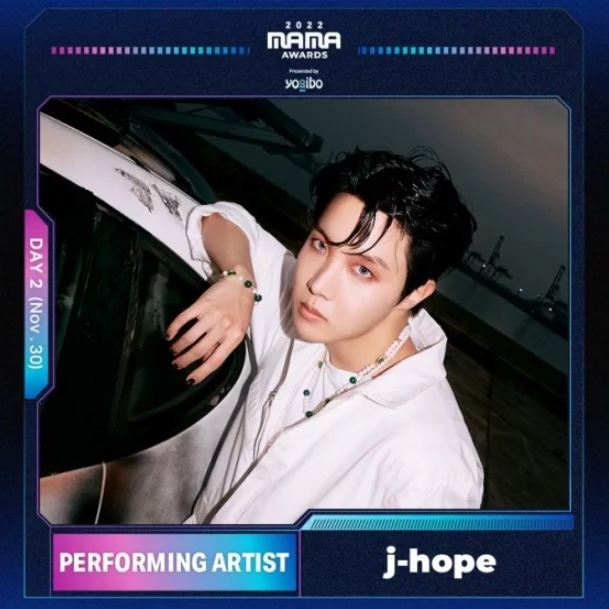 Group BTS J-Hope will appear on the “2022 MAMA AWARDS” as a solo stage.

CJ ENM unveiled details of BTS J-Hope’s solo stage and collaboration stage of five new girl groups on the 28th, which will be shown at the 2022 MAMA AWARDS.

First of all, J-Hope’s solo stage, which drew much attention just by the news of his appearance in “2022 MAMA AWARDS,” was outlined. This stage will be a stage with the message that j-hope wants to convey to the world. It is rumored that each person presents numerous emotions and stories in a box containing Ego as a performance. In particular, it is said that this stage is a stage where J-Hope’s thoughts and hands were reached from beginning to end. The production team hinted, “After watching the stage, we will deeply engrave his name-like ‘Hope’ in people’s hearts,” which is expected to raise global fans’ expectations. J-Hope’s solo performance will be released on the 30th (Wednesday).

A special collaboration stage for new girl groups that rocked the music industry this year will also be prepared. Ive, Kepler, NMIXX, Le Seraphim, and New Jeans will perform on stage like a year-end gift. They will team up with different combinations of their debut songs “ELEVEN,” “WA DA,” “OH(O.O),” “FEARLESS,” and “Hype Boy.” On top of that, it is said that a cover song stage with all 32 people is prepared, drawing fans’ attention from fans. The special collaboration stage of the five girl groups, which can only be seen at “2022 MAMA AWARDS,” will be available tomorrow (29th).

Meanwhile, “2022 MAMA AWARDS,” which is drawing global attention, heralding the all-time performance of top artists, will be held for two days from November 29 to 30 in Kyocera Dome Osaka, Japan. The red carpet will be broadcast live on Mnet from 16:00 and the main award ceremony will be broadcast live from 18:00. (Korean time) It can also be viewed online in more than 200 countries around the world through channels and platforms in each region, YouTube Mnet K-POP, Mnet TV, M2, and KCON official channels.