BTS Jimin “With You” 2022 Spotify OST the most streamed 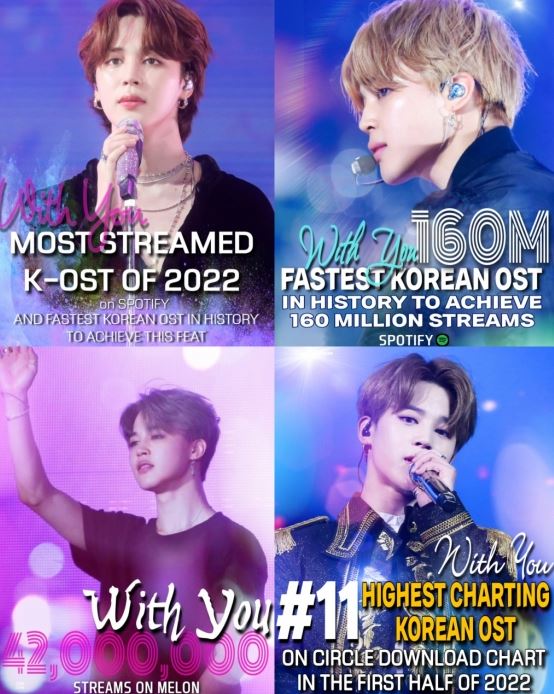 BTS Jimin “With You” 2022 Spotify OST the most streamed

BTS Jimin set a Korean OST record in 2022, which was the most streamed on Spotify through his first OST since his debut.

Jimin’s “With You” surpassed 157,453,208 streaming on the world’s largest music platform Spotify on October 22, marking a new milestone as the most streamed Korean OST released in 2022.

On October 29, it surpassed 160 million streams within 10 hours of its release, setting the record as the fastest Korean OST in Spotify history, continuing to break its own new record for the shortest time in Korean OST history.

“With You,” which achieved 100 million streams in 10 hours on the 85th after overcoming the unfavorable conditions of its release at 11 p.m. on Sunday, April 24, ranked 61st on the Spotify Korea Weekly Top Song Chart (October 21st to October 27th), and is still loved by listeners.

On YouTube, the official music video of “With You” on October 29th recorded 29 million without an artist appearing and is on the verge of 30 million views, continuing to be hot even after the drama ends, leading the Korean OST craze on major global music platforms.

“With You,” which surpassed 42 million Melon streaming in the shortest time among BTS member OSTs on October 27, ranked 11th on the Circle Chart (formerly Gaon Chart) first half of 2022 and is the highest among Korean OSTs, showing the appearance of a strong music source representing the team and Korean OST.

Jimin’s “With You” has set an unprecedented “first, shortest” record in Korean OST history since its release, shining its reputation as an “OST king” with the remarkable achievements of simultaneous nominations in the 2022 MAMA SONG OF THE YEAR and BEST OST categories.