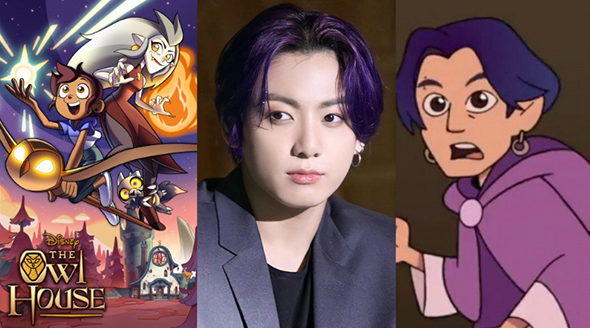 BTS Jungkook is a hot topic as he appeared as a character in Disney’s award-winning animated fantasy TV series The Owl House.

On the 22nd, Jungkook made a surprise appearance as a character with purple hair in the animation fantasy TV series “Owl’s House.”

Bo Coburn, the show’s director and storyboard artist, is also known for his work on Rapunzel’s tangled adventures and trolls. She tagged Jungkook with Taemin, Jessie, and G-Dragon on her Instagram story and revealed that she was the person who inspired the character.

He also left a message to Dana Terrace, the producer and executive producer of The Owl House, saying thank you for making his favorite artists appear and expressing their music and culture a little bit. Bo Coburn also showed his affection for Jungkook by following his personal account on Instagram

Jungkook appeared in BTS’s “Butter” music video with purple long hair, drawing the attention of fans around the world, and the character appeared inspired by Jungkook’s appearance in the music video.

“The Owl House” was praised by both critics and audiences and won the Children and Youth Programming Award at the 2021 Peabody Awards.