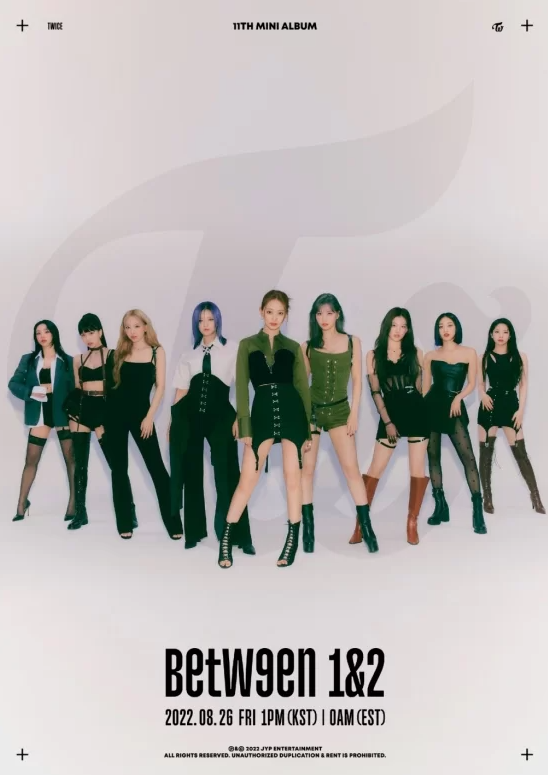 The group TWICE unveiled the concept photo of its new album “BETWEEN 1&2” (Beatwin One & Two) for the first time and showed a special presence.

JYP Entertainment posted a total of 10 individual teasers and group photos on its official SNS channel on the 17th that give a glimpse of the concept of TWICE’s 11th mini album “BETWEEN 1&2. Earlier, in the opening trailer, the members showed their curiosity by finding clues and finding answers, and the concept photo also drew attention with a secret atmosphere.

The nine members in the teaser exuded charisma with captivating eyes, and used props such as meaningful barcode numbers, walkie-talkies, and shoulder holster to give off strange tension and charm. In particular, some of the album names, including “BETWEEN”, were listed with numbers and alphabets, giving it fun to decode.

The title track “Talk that Talk” will aim at listeners’ tastes with an addictive melody on a strong beat. Composer Lee Woo-min “collapsedone,” who made TWICE’s hit songs such as “KNOCK KNOCK” (Naknak) and “The Feelings,” was in charge of composing and producing, and the famous K-pop lyricist team Danke wrote the lyrics. TWICE says sweet whispers with lyrics like “Talk that talk L-O-V-E, let me hear Oh Now.”

TWICE’s comeback is drawing more attention as a new album and TWICE’s first comeback in 2022 after showing off its high popularity and long-run popularity with the title track “POP!” of its first mini album “IM NAYEON” (I am NAYEON) in June.