ENHYPEN overwhelming comments on their comeback. 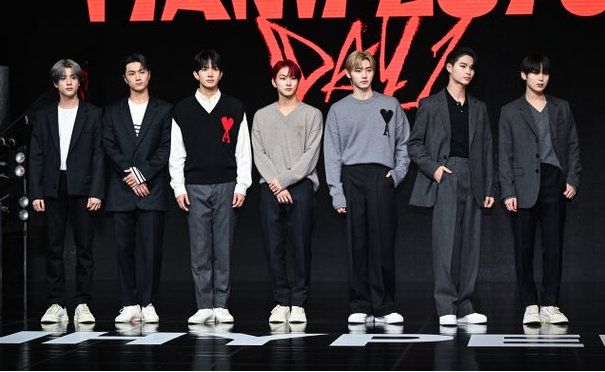 At 11 a.m. on the 4th, a media showcase was held to commemorate the release of ENHYPEN’s third mini album “MANIFESTO: DAY 1” at the Concert Hall of Yonsei University’s Sinchon Campus in Seodaemun-gu, Seoul.

ENHYPEN’s third mini album “Manifesto: DAY1” will be released at 6 p.m. on the 4th. This is the first album since the release of the first full-length repackage album “DIMENSION: ANSWER” in January.

“Manifesto: Day 1” tells the story of those who have doubts about the success defined by adults who decided to “no longer live as others tell you to, but find answers on their own.” With six tracks of various genres, the title song “Future Perfect” (Pass The MIC) will be presented as a Chicago drill genre unfamiliar to Korea.

On this day, Jake said, “Thank you so much for coming to the media showcase despite your busy schedule,” and added, “I prepared hard to show you a new side of me.” J said, “We are making a comeback in about six months, and we will try to show you a high-quality performance as the preparation period was long.”

Hee-seung said, “I’m very happy and excited,” and leader Jung-won said, “The seven members of our team worked really hard on this album. I’m nervous and excited to see ENGENE after a long time.” Sung-hoon said, “I wanted to make a comeback as soon as I was an MC on a music show, but I’m so happy to say hello like this. We will show you a more mature ENHYPEN today,” he said. Nicky also added, “We’ll show you a more intense performance.”

Sunwoo said, “The six-month hiatus was the longest one for us. Nevertheless, we worked really hard on it, so please show a lot of interest in this album.”

“Thankfully, I was able to achieve good results as a million seller thanks to my fans, and I was happy, but I knew that this success wasn’t just about effort,” Nikki said. “I think the new album will prove that we can be loved by overcoming the responsibility to show a new side.”

Meanwhile, ENHYPEN will perform its new song for the first time on Mnet and M2 YouTube channels at 8 p.m. on the same day.