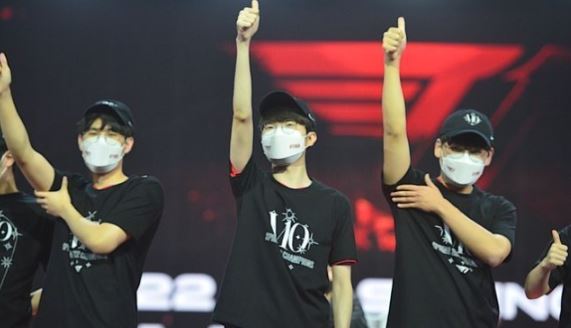 In the meantime, there have been no long-term contracts of six or four years that have been seen in other professional sports in e-sports. Instead, the “2+1” contract or the “2” year contract were options that have recently been created due to soaring players’ ransom or team direction.

T1 Ahn Woong-ki, ‘CEO of Operations (COO)’ wanted to break that framework. In addition, I wanted to re-create a precedent that professional gamers in their 30s who have a short career can play. Professional gamers in their 30s had “Emperor” Lim Yo-hwan at StarCraft e-sports or “The Devil” Lim Jae-deok at StarCraft 2, and at this point, Warcraft 3 “Moon” Jang Jae-ho and Chul-kwon’s “Knees” Bae Jae-min are far from League of Legends.

It was Ahn Woong-ki, the T1 COO, who led T1’s 2022 stove league after the contract of “Fault” Choi Sung-hoon ended. COO Ahn Woong-ki, who led the stove league with acting coach Bae Sung-woong’s promotion as a signal, completed a three-year renewal of “Faker” Lee Sang-hyuk and the selection of T1 coaching staff on the 28th.

In an interview with OSEN in November, it is no exaggeration to say that COO Ahn Woong-ki, who expressed his ambition to “grow the team with the goal of the world’s top professional game team,” is leading a successful e-sports business sample through his own efforts by lowering his dependence on sponsorship. In particular, he has his own philosophy and stance on the current situation and future measures of the overall increase in the cost of operating professional game teams in recent years.

Why did COO Ahn Woong-ki, a cautious person, push for a three-year contract with “Faker” Lee Sang-hyuk? In addition, COO Ahn Woong-ki coolly revealed the reason for the two questions about why all the coaching staff are from T1.

COO Ahn Woong-ki first explained why he renewed his three-year contract with ‘Faker’ Lee Sang-hyuk. He said, “The three-year contract is an expression of his willingness to stay with franchise star Lee Sang-hyuk for as long as possible and until the end if possible. It also expresses faith in Lee Sang-hyuk’s skills and shows the direction of the club to invest in extending the life of e-sports players, he said, stressing that Lee Sang-hyuk, who usually manages himself faithfully, is a player who can trust and invest.

Naturally, he explained not only the team’s franchise star-like treatment, but also the direction of T1, which wanted to set a good precedent to give the entire e-sports.

Regarding the selection of coaching staff from T1, COO Ahn Woong-ki said, “First of all, I wanted to reappoint coach Bae Sung-woong and coach Kim Ha-neul, who led the team just before Worlds this year, and as you know, they are from T1. The rest of the coaching staff answered, “It is the result of interviewing and negotiating coaches from T1 and other clubs and inviting those who are judged to be the most suitable for good performance.”