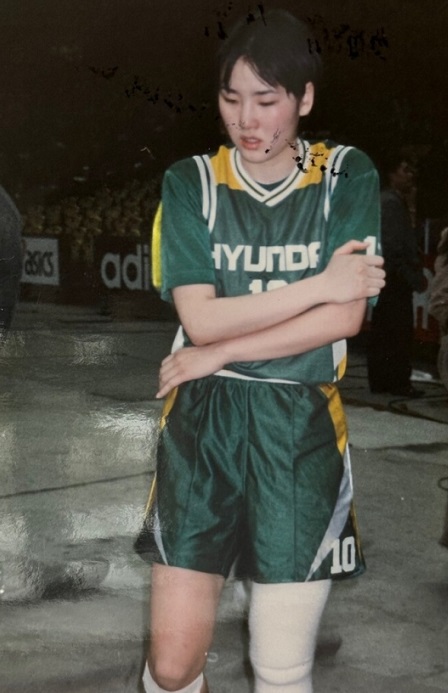 “Middle shot queen? I think I’ve heard that before…, I think it’s a bit embarrassing and excessive. It’s true that he was good at middle shots in the professional league, but there were a lot of people who shot well besides me. There were a lot of fans who called me beautifully, but it’s hard to officially pick a famous nickname that represents me.”

When I asked Jo In-hyun (49, 175cm), who finished his career at Hyundai, a famous basketball house, about his nickname during his active career, he returned. Cho In-hyun is Hyundai’s one-club woman. There are so many prominent star players in the team, including Jeon Ju-won and Kim Young-ok, that it seems to be somewhat buried in fame, but it is one of the unforgettable names for fans who supported Hyundai. This is because he only spent the beginning and end of his career in Hyundai.

“(Kim) Sung-eun’s saint and (Jung) Yoon-sook’s bookstand were known as nicknames in the team, but it’s kind of weird to call them nicknames.” Usually, seniors and sisters used to make the characteristics of juniors, but we sang it on our own. “Everyone is so old-fashioned that it’s not cool to be sung by fans or the media (laugh).”

The media often nicknamed her the queen of middle shots. As can be inferred from the nickname, he shot a middle shot well. It is similar to what Lee Jong-ae called the “Queen of Block Shoot.” However, Cho In-hyun’s nickname also has a rather painful story. It’s true that she shot a good middle shot, but that’s largely because she was forced to do so due to a knee injury.

Until her time at Sunil Girls’ High School, she was a closer player than four. She didn’t shoot a lot of 3-pointers, but it was a big difference from the moves she showed on the unemployment stage. First of all, he had good mobility and was the type to take a lot of activity, so he diligently went back and forth from the court and enjoyed the rim attack.

“It was a time when I was so confident that I felt nothing to break through one or two defenders. I was used to playing such as putting up a layup shot with a face-up or shooting a stop jump shot while watching defensive movements. One-on-one near the post wasn’t bad. Then as soon as I came to the business stage, I hurt my knee and it became difficult to play like before. However, it was not possible to play with strength like an authentic big man under the goal, such as size and physical condition.”

In the end, it can be said that it was a change to survive as a player that often threw middle shots as a power forward. It was amazing to be able to change the play that has been played for a long time and survive like that. She spent most of her career at the Unemployment Basketball Festival, playing briefly in the 1998 friendly, summer league, and retiring. However, fans who remember the scene of constant fighting through energetic play on the court still do not miss her name when referring to the star of the modern era.

“A normal housewife. I’m so satisfied and happy”

Q.How are you doing these days?
After retirement, I raise a daughter and a son and live as an ordinary housewife. My son goes to high school and my daughter is a college student. For about five years, I was a record player in the women’s university league, but five years have passed. Actually, I should do something about basketball after my retirement I never thought of that. There’s no other reason, but I’m very satisfied with my current life. Then, I got to work as a record rep for a while in basketball. As I’ll mention later, I had major surgery on my knee after a long time after retirement. The surgery itself was large, and the rehabilitation period was so long. Being at home all the time made me really depressed. I was in a situation where I had to go out and do something. Then, I remember applying when I heard that the Women’s University League was established and the record repository was selected. I had a great experience and enjoyed it. But I think the best thing for me is a housewife who takes care of her husband and children. That’s the way it is now

Q. Let’s move on to Jo In-hyun when he was a player. How did basketball start?
I started to grow tall when I was in elementary school. I was attending a general school, and at that time, I went to each school at Sunil Elementary School to recruit and test resources for tall children. If you pass there, you’ll be able to work out at Sunilcho. I didn’t know what was going on at that time, so I followed my teacher and took a test and played basketball. You must have judged that you were tall and that you were able to exercise. That was when I was in 5th grade, and I didn’t even know what basketball was. He was about 155cm tall, so he was definitely tall among his peers. I didn’t know it would be a hard road at the time…,(laughs)

Q. What position did you play in the beginning?
It was a forward. It wasn’t a good three-pointer, but in other plays it was a typical three-pointer. And then I was in charge of the power forward, and I played a lot of swingman-like plays rather than an orthodox number 4, so based on the standards these days, it could be expressed as 3.5 times.

Q. What kind of play style were you? It’s hard to find videos of old players, so it’s hard to see the game.
It was good one-on-one. It was a good running axis, so I had a good pace-up based on mobility and I was confident in my pivot play. I didn’t have a lot of 3-pointers from the start, but I had a pretty accurate jump shot from the drive-in and a shot from the middle line. He was also the one who took off the defender with a pivot play while going inside and fighting. Then things started to get tough when I hurt my knee.

Q. The injuries follow the players like fate, are you seriously injured?
It was fatal. It was when I was preparing for my debut after all the contracts were over because Hyundai nominated me first in the winter of my senior year in high school. My teenage ligament broke during a practice match. I had surgery in Hyundai, but I couldn’t recover. Because of that, I had to change the style of play itself. It became difficult to dig in and peel it off. My legs aren’t cool anymore. Even if you draw a picture of how to play in your head and the basketball cells in your body ask for it, your body won’t follow you. Players who have been seriously injured can relate to this. I’m used to it and I can do it well, but the despair that it doesn’t work is really…, It was hard. That’s one of the biggest reasons why I was so successful until high school, but I didn’t fly as much as I expected on the business stage.

“Everything has changed since the injury and surgery”

Q.You must have had a hard time mentally 파워볼사이트
There’s nothing to say it. I didn’t know what it was until middle school, so I just played basketball. Then, after I went to high school, I really enjoyed playing basketball. My skills have improved and I’ve been playing as I wanted. People around me complimented me. That motivated me. All players are like that. Now that I’ve entered the path of basketball, I really wanted to go to the business stage and do well. Then I got hurt on the threshold of my debut, so I was frustrated and I felt sorry for the team. Anyway, I couldn’t run and move as well as before, but what can I do? I need to find my own competitiveness. So I sharpened my middle shot, which was my strength, and became my main specialty. I always had a regret that I could have bothered the opponent’s defense more along with the middle shot if I was able to stir around like before because I was in good shape. There were times when I felt the limitations because I was opening my specialties. It’s more advantageous to have a sword and an axe than to use a spear skillfully.