LCK is the first of the four leagues to introduce 11.16 patches. 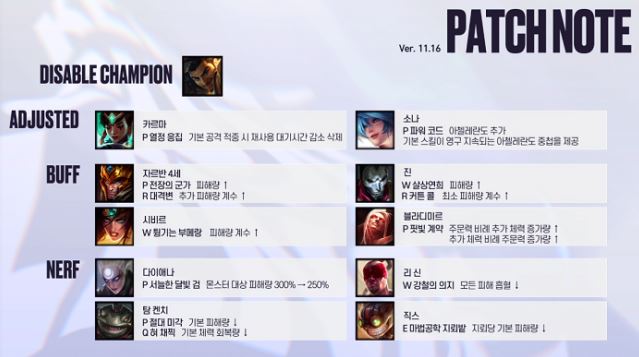 LCK is the first of the four leagues to introduce 11.16 patches.

As the LCK playoffs will be held with 11.16 patches, it is expected that patch proficiency and speed of adaptation will have a big impact on winning or losing.

The 2021 League of Legends Champions Korea (LCK) Summer’s playoffs will kick off on the afternoon of the 18th with the first round of the first round of the Nongshim Red Force and the African Freecs. Depending on their performance in the playoffs, they will be awarded championship points, and the Summer winners will be entitled to go straight to the first seed in the LOL Cup.

This means that teams participating in the LCK playoffs must identify Meta through solo rankings and scrims and organize their own tiers. Only when the coaching staff’s analytical skills and players’ ability to adapt are essential, chances are high that they will survive in the playoffs for a long time.

At 11.16 Akshan is still unavailable. Although Karma and Sona have skill reworked, it does not seem likely to be used because it takes time to research.

Among the buffed champions are Zarvan IV and Jean. Zarban IV’s damage and ultimate additional damage factor Buffro tier rose, and Lee Ju-han, “Korea,” led the game with Rumble as Zarban IV in the first set of the first round of the 2021 LCK CL Summer Playoff on the 16th. Jin’s W-skill damage and the ultimate minimum damage coefficient have risen. Since he was a champion who appeared in previous patches, he is expected to appear more frequently in the upgraded 11.16 patches.

Major Nuff champions include jungle champions who have often been seen in competitions such as Diana and Lee Shin, which has led to the possibility of changing the jungle tier within LCK. Diana’s damage to monsters in passive ‘Cool Moonlight Sword’ has fallen from 300% to 250%, making it somewhat difficult to jungle. Lee Shin-shin is noteworthy in the trend of jungle players, as there are opinions that the W skill has been knocked down, but it does not have a significant impact.