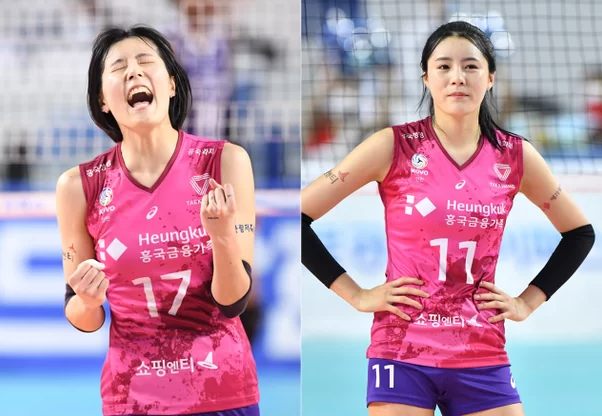 Lee Jae-young and Lee Da-young are “super-large bad news” just by contacting them.What’s going like this?

There is no such inconvenience. The professional volleyball V-League Media Day, which should be full of expectations and excitement ahead of the opening, was marred by truck protests and near-wreath demonstrations with anger from fans.

Then, female volleyball fans were shocked and angry. The intensity of the fans’ anger can be clearly felt by the progress of the truck protest and the recent wreath protest the next day immediately after the report.

On the women’s volleyball fan site, fans started a fundraising campaign to protest trucks and wreaths, saying they should deliver strong protest signs to those involved. The problem was that the report came out late at night, so there was no time to proceed with the protest immediately from the next morning, and it was hard to come up with the cost.

However, this was nothing but a misunderstanding. Even though the fundraising started at 10 p.m., 1.7 million won was collected in just one hour and 40 minutes. Most of the depositors were between 10,000 won and 50,000 won. Even though it was very late at night, fans who heard the news of the possibility of Lee Jae-young’s return flocked to the women’s volleyball fan site one after another, creating strong cohesion. The subsequent process was simply instantaneous. This is because among the fans of the seven women’s volleyball clubs, fans with experience in truck and wreath protests actively fired support.

In that way, truck protests and wreath-taking protests took place in front of the Rivera Hotel in Cheongdam-dong, Seoul, where the 2022-2023 season’s V-League Women’s Media Day was held, hosted by the Korea Volleyball Federation (KOVO). In addition, a wreath-taking demonstration was held in front of Gwangju Metropolitan City Hall, the hometown of Pepper Savings Bank’s headquarters and Pepper Savings Bank volleyball team located in Seongnam.

Fans held truck demonstrations in front of Pepper Savings Bank’s headquarters on the 20th and 21st. In the truck phrase, new phrases such as “Plan to recruit school violence players, permanently withdraw them,” and “Even now, the perpetrator of the school violence who harasses the victims is out forever appeared.

Fans are poised to continue protesting in various ways until Pepper Savings Bank officially declares withdrawal of Lee Jae-young and apologizes to the public. In particular, it is agreed that Pepper Savings Bank will hold a massive protest on the day of its home game in Gwangju.

As criticism spread, Pepper Savings Bank’s club and head coach Kim Hyung-sil struggled to explain the meeting with Lee Jae-young, saying, “I didn’t decide to recruit him, I don’t plan to meet him additionally, and I apologize to my fans.” However, most of the fans do not seem to believe it.

Lee Da-young’s “Notification of No Entry to My Alma mater” incident… A couple of months ago, a ‘tremendous condemnation’

In fact, fans’ outbursts of criticism over the “Lee Jae-young’s attempt to return to the V League” had already been fully detected since his younger brother, Lee Da-young, was expelled from his alma mater training in late August.

At the time, Lee Da-young said in an interview with a media outlet, “Thankfully, I helped my alma mater and did personal training at night.” Then, calls of protest poured into the twin sisters’ alma mater. Some fans also filed complaints with the local education office.

In the end, the Gyeongnam Office of Education said in an official response to fans’ questions, “The negative impact of Lee 00’s visit to his alma mater and participation in personal training, which caused social controversy, is considered to be a matter that should be decided after sufficient discussion by the school.”

Later, an official from the twin sister’s alma mater said in a media interview, “The school accepted all of them as soon as the education office’s recommendation was made, and immediately notified the player of the decision.” As a result, Lee Da-young will not be able to do personal training at her alma mater.

At that time, not only volleyball fans but also the general public criticized Lee Da-young. Lee Da-young’s interview and departure article just before her departure to Romania were very favorable to Lee Da-young, but more than 10,000 “angry” buttons were taken in the articles. On the other hand, there were only about 600 “likes.” It was a reaction that can only be seen in the news of events with very large social anger and repercussions. It also means that the twin sister problem has exceeded the level to be solved at the volleyball level.

Rather, the public criticism of the twin sisters has become much stronger now in all aspects, including the intensity of the backlash, cohesion, and action than when the school violence first broke out in February last year.

From the perspective of twin sisters and parents, such public opinion may be unfair. In retrospect, however, there are too many “self-made” aspects before blaming anyone. Looking back on the twin sisters’ responses and behaviors, it was the “worst” among school violence cases.

Negative images have accumulated from fans as the deletion of handwritten apologies, victim complaints, abandonment of player registration by Heungkuk Life Insurance club and release as a free player. As the situation worsened, he actively explained, but it became an irreversible defeat.

Lee Da-young said, “I just cursed with a knife. “I didn’t stab (the victims),” he protested. Lee Jae-young also said, “At that time, Lee Da-young was angry and picked up the folding knife in the accommodation. But I didn’t swing it,” he said. The remarks shocked the public even more.

In the end, the twin sisters, who were virtually kicked out of the domestic league due to criticism, had no choice but to go to overseas leagues. It was only one-tenth of the annual salary he received in the V League, but there was no other way.

The police cleared the victims of the charges. “Defamation of facts” is being sued again

However, after the contact with Lee Jae-young of Pepper Savings Bank, another additional fact that made fans more angry was revealed.

On the 19th, MBC reported, “Pepper Savings Bank said Lee Jae-young’s apology as a prerequisite for recruiting, but the victims were facing a prosecution investigation for defamation instead of receiving an apology,” adding, “Lee Jae-young is taking legal action rather than apologizing to the victim.”

“The victims were cleared of the police investigation three times for the spread of false information raised by Lee Jae-young,” he said. “However, Lee Jae-young is known to be immediately appealing to the prosecution for ‘factual defamation’.”

When the news broke, women’s volleyball fans further burned their willingness to “stop their death” in Pepper Savings Bank’s attempt to recruit them. Fans were furious that the twin sisters were still forcing the victims to agree in a painful way.

“Worse case” than Yoo Seung-joon and Kang Jung-ho, who are permanently expelled from Korea

It is becoming more difficult for the twin sisters to return to the domestic V-League. Looking at the current public backlash and ripple effect, it is no exaggeration to say that it is recognized by the public as a worse case than singer Yoo Seung-joon and professional baseball player Kang Jung-ho, who have been branded as a “national prize.”

Therefore, if a domestic professional club wants to recruit twin sisters, the parent company may falter due to the public’s boycott, let alone maintain the volleyball team.

What the twin sisters desperately needed to return to Korea was more sincere responsibility and practice than a hundred words, but it has already gone too far. Even if you apologize to the public now, it is extremely questionable whether volleyball fans and the public will believe in its sincerity.

Rather, some in the volleyball world who advocate Lee Jae-young’s return are showing only the lack of clueless perception and poor situational awareness. This is because everyone is confirming that “just by contacting twin sisters” will be a huge negative factor for the entire volleyball world.