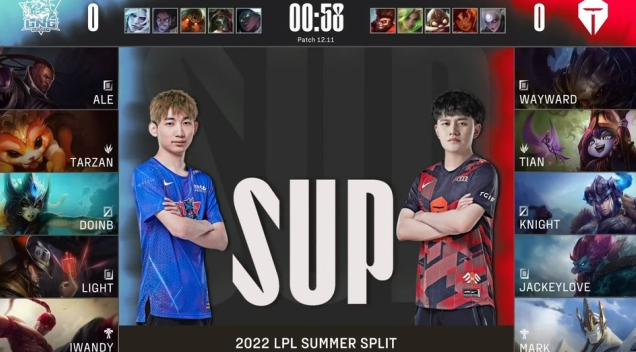 But there was a reason for the defeat. LNG lost to TES on its own from the beginning of the game with a somewhat disappointing choice. What were the ‘disappointing’ elements of LNG?

LNG got off to a good start on the blue side. But he chose Lucian as the most important pick. This was a ban pick that did not have a basic analysis of TES.

TES never chose Lucian even when Lucian was open this season. Although it is 18 wins and 5 losses, Jackie Love has not used Lucian in official matches since 2019. It was one of the cards that didn’t have to be brought quickly.

Rather, it was questionable not to bring Viego. Tarzan had two wins and two losses with Viego this season and was using it as one of his main cards along with Goku.

As Hecarim, considered a counter pick, is one of the three Jungler leaders (Viego-Ogong-Lisin), who are almost in the van in every game, his choice was regrettable.

TES, which was located on the blue side in the second set to be described later, selected Viego.

The union itself was also disappointing. TES completed the “Protect Cogmo” combination with the upper body consisting of Tanker-Anti Tanker-CC, while LNG did not have a champion with invincible aircraft (Kale/Taric), rushing (Camille/Bye), and fixed damage (Anti Tanker).

TES, which entered the Hantapase by protecting Cogmo without a major accident, was like an impregnable fortress for LNG.

Drying Cogmo at the line-up stage was a way to solve this problem. But bottom duo Wright-Iwandi squandered the opportunity with a disappointing choice.

Nami has a recovery, while Lulu has no recovery. Therefore, even if there is a minor loss in the first-level deal exchange, it is difficult for Cogmo to withstand Lucian’s initial damage alone if LNG (Lucian-Nami) is actively involved.

However, the skill of the first level light (Russian) was not a rush or a strong check, but a burning fire (W). Under the circumstances, he would have chosen to supply CS, but in the end, Cogmo, the first level, succeeded in suppressing the front movement and spit on Wright even though his opponent achieved level two first.

In the ensuing situation, LNG recorded 25 CS inferior (77-102) at around 10 minutes and 30 seconds amid the bizarre appearance of Lucian and Nami, who are strong in close combat, retreating to the advance of Cogmo-Lulu, which is specialized in long-distance checks. In the past, it was suspected that he was the same person as Dogo-Hope, who was aiming for Dogo-Hope using wind gusts and flashes.

As there was a difference in growth, of course, TES was fast in leading the field of vision and joining.

TES was also relatively meticulous in the appearance of the skirmish. When Cogmo, which is protected by team members, selects a target, it seems to be close to a “top-up fortune-telling combination (dealer Bottom’s decision-making-delivering-to-upper body)” in which other team members put CC in the enemy.

On the other hand, LNG lost a decisive opportunity as the bottom duo failed to follow suit, even though Tarzan played a strong role in kicking Cogmo to our side. In other words, it was a ‘bottom attack’ (upper body CC).

Of course, TES chose Viego. TES, who saw Silas in the fourth LNG van, then picked Ari without hesitation after flying Swain-Taliya. Even though Doinbee’s 12 wins and 4 losses are at risk of being counted as Lysandra. As predicted by TES, Doinby, who did not take out Lysandra after MSC in 2020, chose Swain.

This caused another problem for LNG. In the first set, there was no “distant confirmed CC flag” owned by Tefe in the second set.

There were Lacan’s flashing, seductive sprint, and war dance, but there were only two hard CCs (flag-binding orders) to connect them. In fact, only Lacan, whose body had to come in, had to be closely watched.

On the other hand, TES had long-range CCs such as Leona’s black spot explosion and the sword of perforation, and there were CCs such as Dawn Shield (Leona Q), Viego (The Fall of the Ghost), and Ari (Attraction) to connect them.

The second set of LNG-TES, which seemed to be watching WE and V5, was followed by a one-sided flow due to this problem. 토토추천

In particular, in this process, Ari, who has a number of mobile devices, sometimes single and sometimes with his colleagues, trampled on his opponent. It was a moment I missed “Lisandra” that limited Ari’s mobility.

As if watching idol worshippers, LNG, unable to help Ari dance in their camp, watched his MVP appearance without threatening Knight throughout the second set.