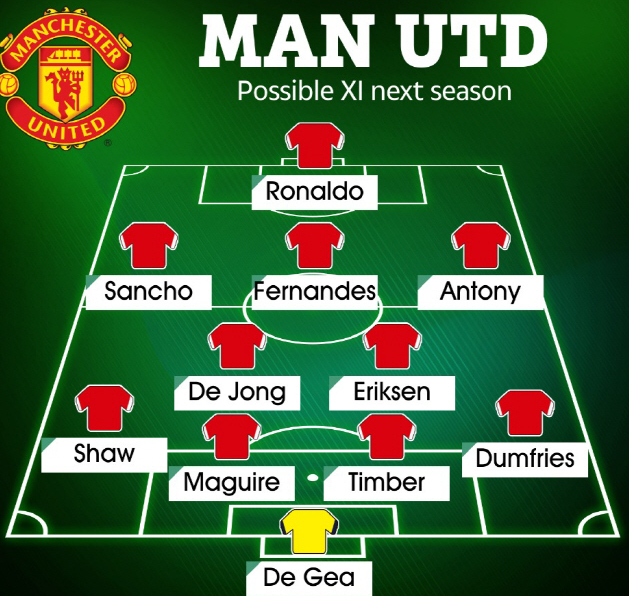 The first recruitment is also imminent. Manchester United officials flew to Amsterdam, the Netherlands on the 20th to recruit Ajax’s wing forward Antony (22), coach Ten Hagh’s “favorite student.” They entered the final round of negotiations on the condition that they would pay a transfer fee of £ 40 million.

The reinforcement of the central midfielder is also gaining momentum. As Tottenham stepped out, claims have been raised that it is close to recruiting Christian Eriksen (Brentford). Ten Hagh also continues to work hard to recruit Frankie Deyong (Barcelona).

Ten Hagh has planned to recruit five players from the transfer market this summer. Rumors are also circulating that Ajax’s central defender Julien Timber and Inter Milan’s Denzel Dumfries will be recruited. Timber and Dumfries are both from the Netherlands, like coach Ten Hagh.

“The Sun” unveiled Manchester United’s expected best 11 in the 2022-2023 season, where they all nested on the 21st. In the 4-2-3-1 system, Cristiano Ronaldo is in the lineup, and Jayden Sancho, Bruno Fernandez and new face Anthony are in the second line. Deyong and Eriksen are located in defensive midfielders, and Luke Shaw, Harry Maguire, Timber, and Dumfries are located in four backs. The goal is guarded by David De Gea.

There is also an alternative. If Timber’s recruitment is not possible, coach Ten Hagh also has Faustores (Villa Real) and Argentine-born Lysandro Martinez (Ajax) in mind. AC Milan’s Ismael Benasser is also on the list for the central midfielder. In addition, if he fails to recruit Dumfries, he can continue to use the existing Diogo Dalot.