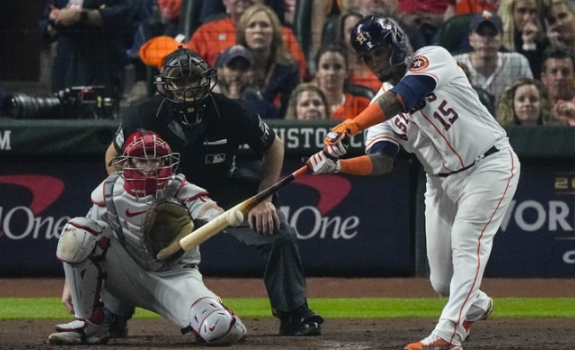 Martin Maldonado (Houston Astros) reportedly received a baseball bat as a gift from Albert Pujols ahead of the World Series and was belatedly disallowed. The reason is that it is not allowed to use.

NBC and ESPN reported on the 31st that they used the baseball bat they received from Pujols in the first game of the 2022 Major League Baseball World Series against the Philadelphia Phillies, but changed it to another product after being ruled unavailable by the MLB secretariat from the second game.

What Maldonado received from Pujols is an American Maruchi AP5 maple bat. Maldonado demanded a bat from Pujols and received six. It was to receive the energy of Pujols, who hit 700 home runs in his career.

The problem is that maple bats have not been used since 2011. However, the reason why the product was not allowed by the MLB secretariat is not like a compression bat with strong resistance.

The MLB and MLB Players Association adopted the recommendations of the Health and Safety Advisory Committee ahead of the 2009 season to investigate the broken bat. The advisory committee collected 2,232 broken bats from July to September 2008 and examined them, confirming that 756 were broken into several pieces. There was a safety problem because it was broken into various fragments.

In addition, the MLB Secretariat changed the specification of the bat diameter from 2.75 inches to 2.61 inches in the process. The product Pujols was using did not fit these two.

However, the MLB Secretariat recognized vested interests in players who had previously used the product like Pujols and made them use it as it is. Until the use of the bat was banned, only players who did not use the bat or made their debut since 2011 were not allowed to use it. For this reason, Pujols was able to use the AP5 Maple bat as it is, but Malnado cannot use it either.