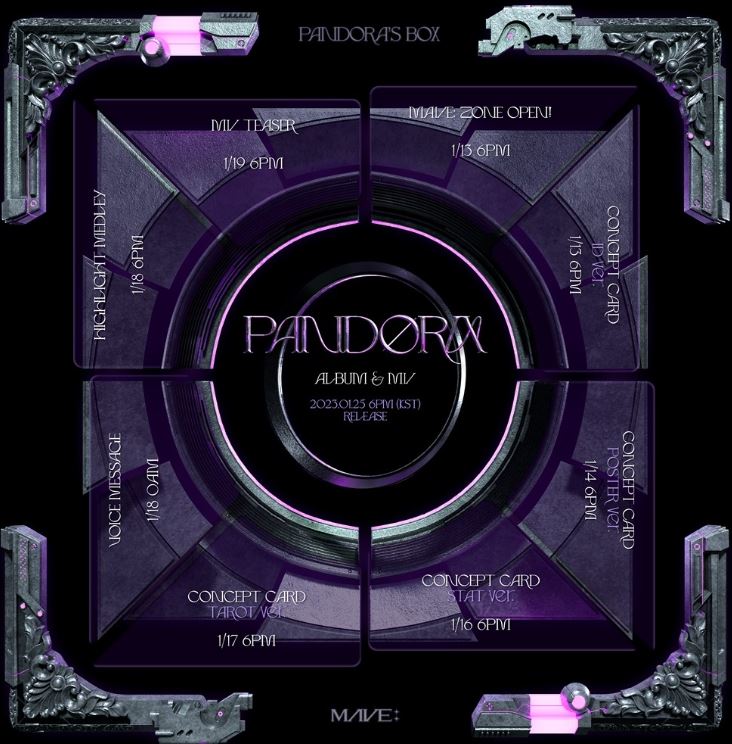 The debut of girl group MAVE: (Mave) has been confirmed.

On the 11th and 12th, Metaverse Entertainment unveiled the “PANDORA” logo motion of MA-VE: and the debut promotion scheduler, opening the album name. Expectations are high on what will be inside the “PANDORA’S BOX” that MA-VE: will open, and what messages and newness will be delivered through its debut album.

First of all, the “PANDORA” logo motion contains a purple box artwork featuring the phrase “PANDORA” and metal decorations, raising expectations for a different concept of MA-VE:.

According to the then released scheduler image, MA-VE: will release a variety of teaching contents sequentially, starting with four concept cards, voice spoilers, highlight medley, and music video teasers.

At 6 p.m. today (13th), MA-VE:’s official website will officially open. MA-VE: is going to preheat its debut by releasing its teasing contents through its website’s teasing page along with its official SNS.

Attention is focusing on what kind of colorful charm MA-VE: which predicted the attractive full-body visuals of members Marty, Jenna, Tyra, and Siwoo as the first group image earlier.

MA-VE: is the first girl group of the year to debut in the music industry in 2023. While attention is focused on the full-fledged moves of MA-VE: and Metaverse Entertainment, which will create a new wave in the K-POP scene, the extraordinary scale of MAVE: is expected to be seen in more teaching contents.

MA-VE:’s debut album “PANDORA’S BOX” will be released on various online music sites at 6 p.m. on the 25th.