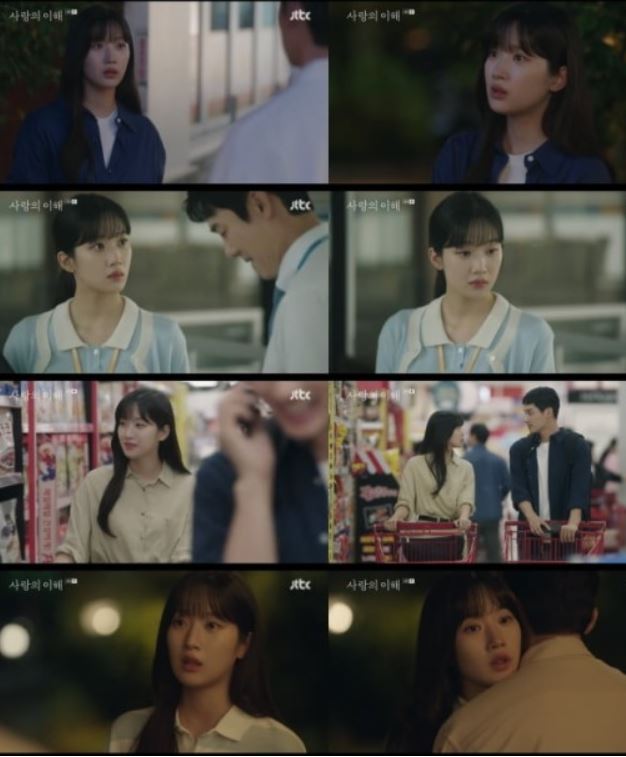 Moon Ga-young exploded the excitement index with a sudden hug with Yoo Yeon-seok.

In the fourth episode of the drama “Understanding Love,” which aired on Thursday, Soo-young (Moon Ga-young) once again recalled the mixed timing of love when it was revealed that she watched Sang-soo (Yoo Yeon-seok), who ran to the meeting place, faltered for a moment and went in the opposite direction.

Since then, I could feel the temperature of the two people, who had noticeably cooled down. Unlike Jong-hyun (played by Jeong Ga-ram), Sooyoung showed a cold expression with Sang-soo at the same workplace, and had a childish emotional fight with the writing points in the document and remained cynical. Soo-young, who happened to meet Jong-hyun at a local mart on payday, gave the play fun by going grocery shopping and joking around, and bringing up family stories that she had hidden and hidden.

There was an incident in which Suyeong’s gaze, which was rarely known, stopped for a moment. Sooyoung, who went out to break the alcohol she drank at the evening of the training center she visited for the “AI Financial Education Training,” once again spoke to Sangsu who followed her. With mixed emotions, Sooyoung said to Sangsu, “Do you still like me? “You won’t be able to do anything at all…” he asked with a bitter expression.
Sooyoung then said, “Do you really think I didn’t have any feelings for Ha-jang?” As if the sincerity of something I’ve never brought up was a catalyst, the two hugged for the first time and surprised the viewers.

Moon Ga-young is maximizing the immersion of the play by perfectly wearing Ahn Soo-young’s character, who does not easily believe in love, and perfectly expressing the complex emotions of Yoo Yeon-seok, Jung Ga-ram, and Geum Sae-rok. As the episodes continue, it is becoming more curious to see who will be the end of Moon Ga-young’s gaze in “Understanding Love,” where the hidden narrative of swimming is being peeled off one by one.