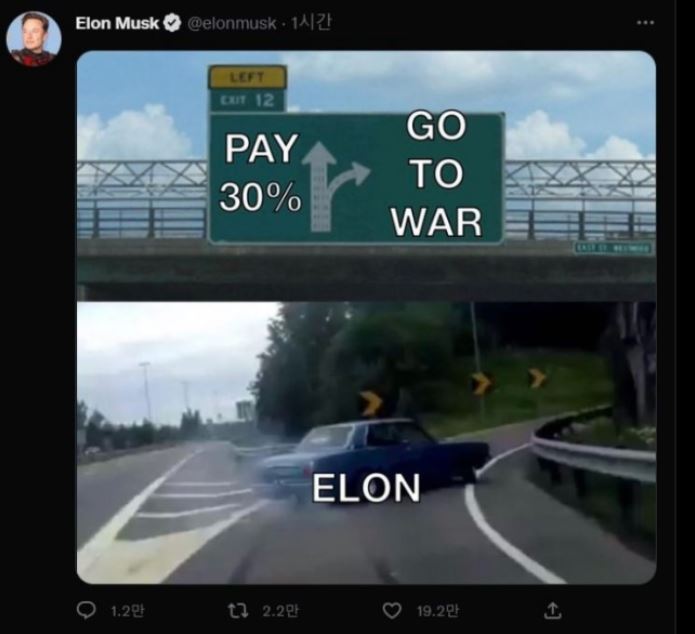 Twitter CEO Elon Musk, who expressed dissatisfaction with Apple‘s “in-app payment fee,” posted a message targeting Apple. Amid growing sense of crisis over Twitter’s exit from the Apple App Store, there is a war between the two companies over the payment of fees as Apple announced that it would stop most of the Twitter ads.

Musk posted a photo of the highway on his Twitter account on the 28 (local time) The photo shows Musk’s choice of “go to war” instead of “pay 30%” for Apple’s App Store.

He shot Apple’s in-app payment fee in a series of tweets. “Do you know that Apple’s App Store is subject to a secret 30% tax?” he wrote, “Apple threatened to remove Twitter from the App Store, but did not tell me why.”

“Apple has stopped most of the advertisements on Twitter,” he said, targeting Apple, “Do they hate freedom of expression?” Apple also posted a survey asking whether censorship measures for apps that affect users are justified.

In-app payment refers to a method of charging parts that occur in the stage of users downloading and using the app for free. Apple and Google, which dominate the app market, use in-app payment methodsIt has been criticized for forcing payments only and collecting 30% of mobile content revenue in the name of distribution fees. Apple and Google can censor the content of apps on their app markets and kick them out because they don’t comply with their regulations.

Behind Musk’s sniper attack on Apple lies the controversy over in-app payment fees and a sense of crisis of expulsion. Phil Schiller, who oversees the Apple App Store, recently deactivated his Twitter account, which he used to promote Apple products and services. Apple’s move comes amid a heightened sense of crisis over the removal of Twitter from Apple as Musk complained about the in-app payment method.

Earlier, Apple CEO Tim Cook mentioned the relationship between Twitter and Apple in a recent interview with CBS, saying, “I hope Twitter will maintain moderation under the new management.” He also criticized the Twitter content policy indirectly, saying, “No one will want to express hatred on his platform.”

This remark is actually a direct aim at Musk’s management style. After acquiring Twitter, Musk fired all the executives who rebelled against his policies and dissolved the board. Many users and advertisers have left the company for fear of flooding with hate and fake news due to content policy propaganda such as reviving most of the accounts that have been fired and suspended, which is about half of the total employees (3,700 people).

According to the Washington Post (WP), the number of followers of far-right and hard-line Republican politicians surged after Musk’s Twitter acquisition a month after Musk’s acquisition. WP analyzed the changes in the followers of 10 major Democratic and Republican politicians during Musk’s one-month takeover of Twitter, and found that the followers of far-right Republican Congressman Marjorie Taylor Green (Georgia), who has insisted on impeaching President Joe Biden since the last midterm elections, increased by more than 300,000.