NBA legend Steve Nash, why did he fail as a coach? 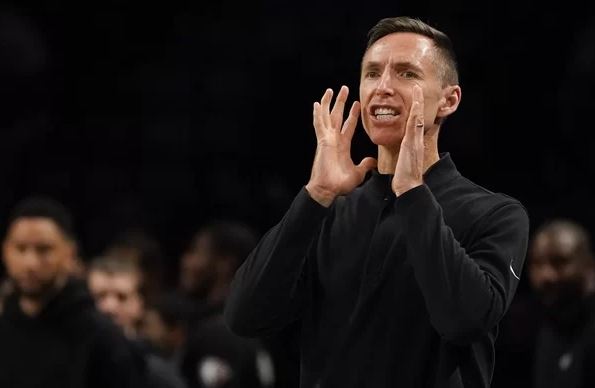 NBA legend Steve Nash, why did he fail as a coach?

NBA (American Basketball) legend Steve Nash became the main character of the disgraceful record of “the first replacement of the coach in the 2022-2023 season.” Local U.S. media, including sports media ESPN, reported on the 2nd that “The Brooklyn Nets replaced Nash.” Brooklyn is known to be led by coach Jacques Vaughan as acting coach for the time being.

Steve Nash, a Canadian national, was a point guard representing the NBA when he was active. He boasts a stellar career, including two regular season MVPs (2005-2006), eight All-Star and five assists, and seven All-NBA teams (3 first team and two second-third team). As a point guard, he was not only an excellent pass and game management ability, but also a first-class shooter with 180 clubs (50% field throw success rate + 40% 3-point shot success rate + 90% free throw success rate). Nash was recognized as a superstar who was proudly included in the “75 Great Players” in league history selected by the NBA Secretariat last year to mark the 75th anniversary of its foundation.

Steve Nash was also nicknamed “Seungsang” among domestic basketball fans. The nickname originated from the fact that it reminds of Zhuge Liang of the “Three Kingdoms” for his unfortunate career, which had no experience in advancing to the finals, let alone winning the MVP. Nash, who is also known as a soccer fanatic, was also liked by domestic fans when he was known to be a big fan of Tottenham Hotspur, where Son Heung-min belongs after retirement.

Steve Nash retired from active duty in 2015, served as a consultant for the Golden State Warriors, and took over as the new manager of the Brooklyn Nets in September 2020. It was the birth of a superstar-turned-manager who was rare in the NBA. On top of that, Nash’s move drew keen attention as Brooklyn was emerging as a strong favorite by recruiting NBA superstars such as Kevin Durant, Kyrie Irving, and James Harden one after another.

However, the meeting between Nash and Brooklyn ended in a catastrophic failure. Nash has just exceeded half of his four-year contract, and he has resigned as a coach due to a disgraceful notice of replacement. For Nash, it is more painful not only that he failed to win the championship, but also that he left a big dent in his image and reputation accumulated during his active career.

On the surface, Nash’s performance in Brooklyn is not bad. Nash earned 161 wins (94 losses) in the regular league alone and led the team to the playoffs for the second consecutive season. However, Brooklyn, which was considered a “super team,” was not a team that could be satisfied with this level of performance.

Steve Nash placed Brooklyn in second place in the East in his first year, but lost to the winner, Milwaukee Bucks, after a neck-and-neck race to Game 7 in the second round of the playoffs. In the 2021-22 season, he was on the verge of elimination from the playoffs due to the 11th consecutive loss in the second half, but he was revived through a play-in tournament, but suffered a humiliating 0-4 sweep loss to the Boston Celtics in the first round of the PO.

There were already many voices calling for the replacement of Nash, whose trust had fallen to the bottom at the time of his elimination in the first round last season, but the club reappointed him for now. However, as Brooklyn, who was considered the favorite to win this season, fell to 12th out of 15 eastern clubs with 2 wins and 5 losses despite Durant’s strong performance, the club whose patience reached its limit eventually drew a knife to Nash.

It is evaluated that Nash’s failure showed a typical pattern of “why leaders from superstars could not succeed as coaches.” After retirement, Nash immediately took the helm without any decent leadership lessons or coaching experience. As feared, Nash showed a lack of experience in all aspects, including control of the team, communication, tactics, and crisis management, and was close to failing as a coach.

Steve Nash’s representative problems are abuse of players, lack of flexibility in tactics, and lack of control over superstars. This is similar to Lee Chung-hee, Lee Sang-min, and Hyun Joo-yeop, who are considered representative examples of star-turned-manager failures in Korean basketball.

Nash was notorious for rolling key players for more than 40 minutes without much management in the NBA, which has 48 minutes of game time, and being highly dependent on the ace. Durant, an ace, suffered a few serious injuries such as a ruptured Achilles tendon and needed careful management of his playing time, but Nash left a rare quote in an interview saying, “There is no other option for our team than to let Durant play a lot and win and lose less.” Harden even had to keep pushing ahead with his appearance despite being unable to walk around due to a hamstring injury. This is why Nash’s Brooklyn failed to use his strength by revealing physical problems in the second half of the season and the playoffs.

His tactics and game management skills were also poor. In Game 7 of the second round of the 2021 Eastern Round against Milwaukee, he failed to use his operational time in the match and kept Durant, who had lost his stamina, playing an air ball and providing an excuse to be eliminated in vain. In the playoffs against Boston the following year, he was tactically overwhelmed by his former defensive coach, Imem Udoka, and collapsed in vain without a single counterattack.

Especially fatal was Nash’s lack of leadership, which had absolutely no control over the superstars. This is also unusual for a star-turned-director to have a weakness. Usually, star-turned coaches sometimes have conflicts while pushing active players with excessive self-esteem and eye level, but it is hard to find them being dragged by the influence of superstars. This is rather a phenomenon that occurs in coaches from unknown players, who have relatively low reputation during their active career, and Nash was a superstar who was not far behind Durant-Irving in his career.

Nash has maintained a friendly relationship with Durant, the team’s star player, during his Golden State days. It was even said that Durant’s breath played a role in Nash’s appointment as Brooklyn coach. When Nash took over as coach, Irving said, “Our team doesn’t need a coach. Even though he openly seemed to ignore the coach’s authority with his bombshell saying, “I or Durant can also play a role as a coach,” Nash showed no reaction.

Brooklyn has had many problems inside the locker room over the past two years. Irving, famous for his travel, was suspended for refusing to be vaccinated against COVID-19, causing great damage to the team’s performance and causing controversy over trade demands. Another superstar, Harden, who was in conflict with Irving, was disappointed by Nash’s handling of the team and left for Philadelphia after a slump. To make matters worse, even Durant, who had maintained a friendly relationship, asked for a trade in the off-season, revealing to the public that his relationship with Nash had gone awry.

Despite repeated disruptions, Nash never showed any charisma that made bitter remarks to star players or grabbed the locker room strongly. Brooklyn said he gave a high score to Nash’s communication and affinity, which maintained good relationships with star players when he appointed him, but as a consultant, he showed only the incompetence of being dragged by the breath of superstars.

In the opposite case to Nash, Steve Kerr, the head coach of the defending champion Golden State Warriors, was a member of the Chicago Bulls dynasty when he was active, but his individual status was only a backup three-point shooter. However, as a coach, he is said to have built a dynasty by successfully leading Golden State, which is full of star players such as Stephen Curry, Draymond Green, Clay Thompson, and Jordan Pool. Nash’s bitter lesson is that his qualities as a good player and the virtues he demands as a good leader-manager are completely different.