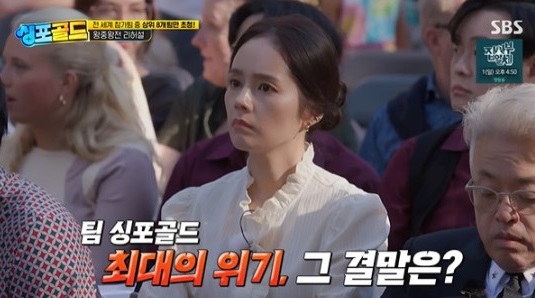 The final episode of SBS entertainment show “Singpogold,” which aired on the 25th, was drawn.

Under the leadership of Park Jin-young, Heritage Massquire, who competed in the World Choral Cup 2022, appeared as a Korean team and prepared for the final stage of the “Coral Cup” to advance to the King of Kings.

In particular, Han Ga-in ironed the members’ clothes and said, “I hope you’ll be satisfied regardless of the result and wear this at the King of Kings.”
I looked forward to the day of the announcement of the advance to the King of Kings.

At this time, I finally got a call to tell me the results. Fortunately, I’ve been waiting for this news. While rehearsals of each team preparing for the stage were drawn, Park Jin-young and Kim Hyung-seok worked together until the end just before the stage.Han Ga-in, who was watching the stage, watched with breath, saying, “I’m all nervous.”

In particular, Han Ga-in’s doll beauty in the audience was enough to catch the eye. Once again, it made me certify the natural beauty of “Korea’s Olivia Hussey.”

Meanwhile, SBS entertainment show “Singpo Gold” has discovered an exciting and unique “performance choir” with world-class producer JYP Park Jin-young and the best experts in each field as assistants. It’s a program that depicts the first K-chorus battle in Korea