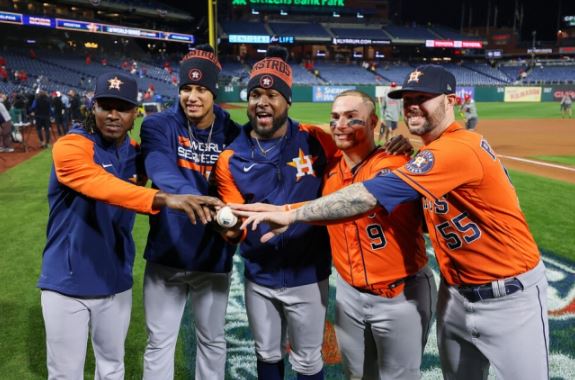 It started with Christian Javier. He showed two walks, nine strikeouts, and no runs in six innings. Since then, Brijan Abreu and Rafael Montero have been in charge of one inning each. Ryan Pressley finished the bottom of the ninth inning. They didn’t give up a single hit to their opponents. It is the second team in the history of the 118th World Series to record a no-hitter.

The Houston Astros beat the Philadelphia Phillies 5-0 in Game 4 of the 2022 Major League Baseball World Series at Citizen’s Bank Park in Philadelphia, Pennsylvania, on the 2nd. Philadelphia only got three walks in nine innings, but did not record a hit. He struck out 14 times. It is the first time in 66 years that a no-hitter record was made in the World Series after Don Larsen (New York Yankees) achieved a perfect game (not allowing a single runner on base) against the Brooklyn Dodgers (now LA Dodgers) in 1956.

The ball of starter Javier was powerful. He beat the Philadelphia lineup with a two-seam fastball (72% of all pitches) of 96 miles per hour (155 kilometers per hour). He started three games in the postseason this year, showing two wins, no losses, and an untouchable pitch with a 0.71 ERA. Javier smiled in an interview after the game, saying, “What’s interesting is that my parents said they would do a no-hitter before the game, but I really did.”

Amid the pitching staff’s all-out pitching, Houston scored four more runs in the top of the fifth inning with a full base and a ball that hit Jordan Alvarez’s body, and made a big inning with Alex Bregman and other timely hits. Houston tied Philadelphia with two wins and two losses in the series with a victory in Game 4. Game 5 of the World Series will be held at the same venue on the 4th.