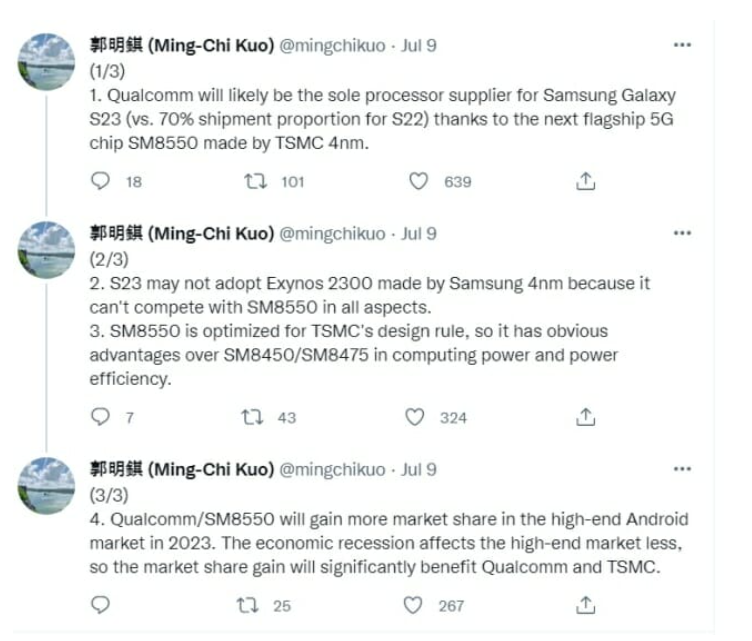 It is predicted that Samsung Electronics will abandon its Exynos chip and only install Qualcomm’s Snapdragon chip on its next-generation smartphone Galaxy S23.

9 to 5 Google, an IT media outlet, recently reported as such, citing a famous IT analyst Guo Ming-chi’s Twitter account.

“Qualcom is likely to be the only processor supplier of Samsung Galaxy S23,” Guo Ming-chi said on Twitter on the 9th (local time).

Samsung Electronics has been adopting Qualcomm and its mobile application processor Exynos in parallel. Snapdragon chips were installed in other major markets such as the U.S., but other markets such as Europe and Asia were equipped with their own Exynos chips.

In the case of the Samsung Galaxy S22, about 70% of the Qualcomm Snapdragon 81st generation chips and the remaining 30% of the chips are equipped with Exynos 2,200 chips.

“The Exynos 2300 chip manufactured by Samsung’s 4-nano process may not be adopted for the Galaxy S23 series because it lags behind in competition with Snapdragon 8 2nd generation chip (SM8550) in all aspects,” Guo Ming-chi said. In addition, Qualcomm predicted that it will secure more market share in the high-end Android phone market next year with next-generation chips.

It is not yet known whether Samsung Electronics’ new processor will use the existing Exynos brand or other brands.