The main character who lost the first round of “Mr. Trot 2.. 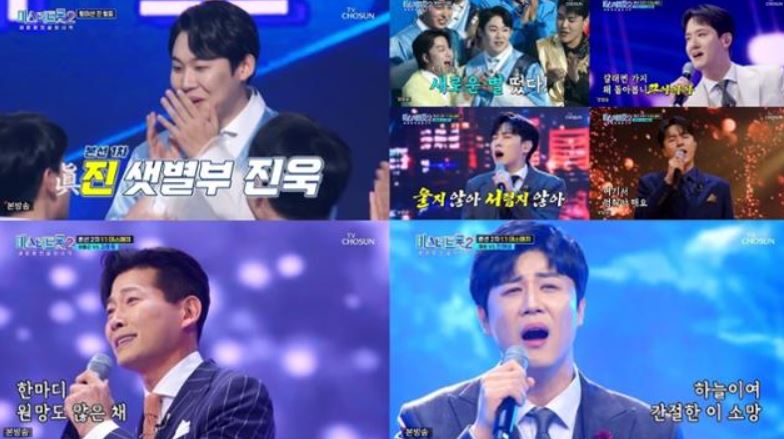 The main character who lost the first round of “Mr. Trot 2″Will I be a new hero?

Mr. Trot 2-The Beginning of a New Legend’ surpassed the national rating of Nielsen Korea, a ratings survey company, recording its own highest ratings. This is the record of dominating the channel five weeks ago.

In TV Chosun’s “Mr. Trot 2 – The Beginning of a New Legend,” which aired on the 19th, following the ecstatic stages of the team mission in the first round of the finals, the long-awaited “beautiful and cruel mission” began.

The average age is 11.5 years old, and the core part of the sensation (Hwang Min-ho, Cho Seung-won, Kim Min-gun, Seo Geon-hoo) received 13 hearts for the Korean traditional trot genre and Nam-jin’s “History Book.” Hwang Min-ho, who was praised as “Michael Jackson in trot,” advanced to the next round.

Group A2 (Lee Do-jin, Choi Woo-jin, Park Seo-jin, and Kang Dae-woong), which drew attention with a performance that seems to have translated a scene from the movie “Kingsman,” won 12 hearts with the semi-trot genre and Young-tak’s “Like a Gentleman.” Only Kang Dae-woong, who showed off his skills in active duty even in an unexpected situation where his in-ear was missing, was named as a successful candidate.

After all the order of the team mission ended, Ha Dong-geun, Gil Byung-min, and Park Seo-jin passed additionally, dramatically reviving from the crisis of elimination. The main character of the first round of the finals went to Jin Wook, the new star. Following Park Ji-hyun of the university department who won the master’s preliminary examination, Jin-wook was born one after another among the new faces, raising expectations for a new hero to be produced by “Mr. Trot 2.”

Since then, the curtain has risen on a one-on-one death match. The first showdown was pointed out by Ha Dong-geun, who faced Kim Yong-pil. Following Ha Dong-geun, who showed sorrow and excellent trot skills with Yoon Bok-hee’s “Why Turn Around,” Kim Yong-pil gave a dramatic impression with Kim Jung-soo’s “You,” a stage of tears dedicated to his wife who silently endured chasing her dream. In a fiery showdown between active skills and middle-aged experience, Kim Yong-pil won with 15:0 all votes, touching the hearts of wives across the country.

The match between “Trot Casanova” Yoon Joon-hyeop and Sung-min, who drew attention for their outspoken challenge beyond the age gap of 15 years, was 10:5, and Rookie Yoon Joon-hyeop won the game. Yoon Joon-hyeop, who chose Kim Soo-chan’s “Love Solver,” gave an ecstatic showtime. Seong-min, who chose the method of the regularity, was recognized for his desperate expression of emotions and sincerity toward the trot with Lee Ho-seop’s “Mujeong.”

As the preview final continued to face off between Jae-ha and Jin Hae-sung, the main characters of the big match, the masters expressed difficulties in choosing. Jae-ha, who showed Kang Seung-mo’s “Love,” drew admiration by maintaining her bold singing ability until the end with a little shaking or unnecessary performance. Jin Hae-sung, who made an unexpected selection with Shim Soo-bong’s “Binari,” proved a wide vocal spectrum through Jinhae Sung-pyo’s “Binari,” reinterpreted in his own style.