Zeka Kim Gunwoo, “The drama without a script will continue.” 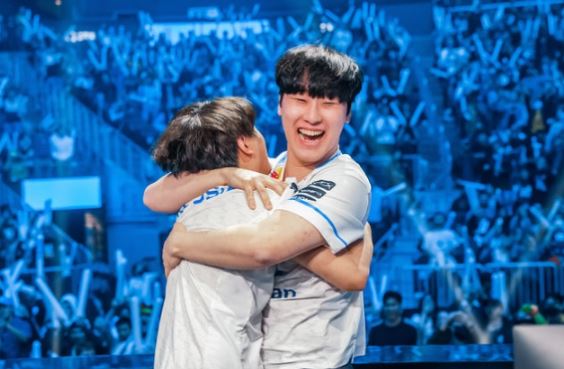 Zeka Kim Gunwoo, “The drama without a script will continue.”

DIX even beat Gen.G, the “giant” and advanced to the finals with a series of upsets. Midliner ‘Zeka’ Kim Gun-woo played the biggest role in advancing to the finals. Kim Gun-woo continued to raise his form from the start, greatly contributing to the team’s advance to the top round. Kim Gun-woo said, “The drama without the script will continue,” signaling that he will continue to play in the final.

DIX won 3-1 against Gen.G in the semifinals of the 2022 LOL World Championship (hereinafter referred to as the LOL World Cup) at State Farm Arena in Atlanta on the morning of the 31st (Korea Standard Time). Starting with the play-in stage, DIX wrote a series of growth dramas, heading to San Francisco, the final stage where T1 is waiting.

Kim Gun-woo, who responded to the press room interview after the game, explained why he showed great form from the second set compared to the first set defeat in the semifinals. Kim Gun-woo said, “There was some tension until the first set. “From the second set, I think I followed our Banpick’s intention well and won with confidence,” he explained.

In the 2022 LOL World Cup, DIX advanced to the finals after a series of low victory predictions. Starting from Mexico City, where the play-in stage will be held as LCK 4 seed, it will now head to San Francisco through New York and Atlanta. Zeka Kim Gunwoo, who is heading to the final on the first LOL World Cup stage, already had sparkling eyes. Kim Gun-woo said, “The drama without the script is not over yet. “Please look forward to the next episode,” he said with a smile.

In the semifinals, DIX overcame Gen.G, who was like a Grim Reaper in Korea. Gen.G did not even allow DSX to win the set during the summer season. Kim Gun-woo said, “I was worried about losing all sets. Still, I gained confidence because our team succeeded in “upsetting” one after another through the selection match and the LOL World Cup,” he said.

In the final, Kim Gun-woo will face the final boss of the 2022 LOL World Cup. The opponent is legend “Faker” Lee Sang-hyuk, who has won 10 LCK titles, 3 LOL World Cups and 2 MSI titles. Lee Sang-hyuk will overcome all the public evaluations that “Isn’t an aging curve coming?” and challenge the top position again in five years since 2017.

Zeka Kim Gunwoo is determined not to lag behind at all in the face of Lee Sang-hyuk. Kim Gun-woo said, “The performance has been on the rise since the starting game. There are a lot of supplemented parts of the team, he said. “Of course, Lee Sang-hyuk’s skills were considerable when I watched the game on the 30th.” Still, I will play the game thinking that we can win enough,” he said.