Zeus, MVP to the quarterfinals of the LOL World Cup 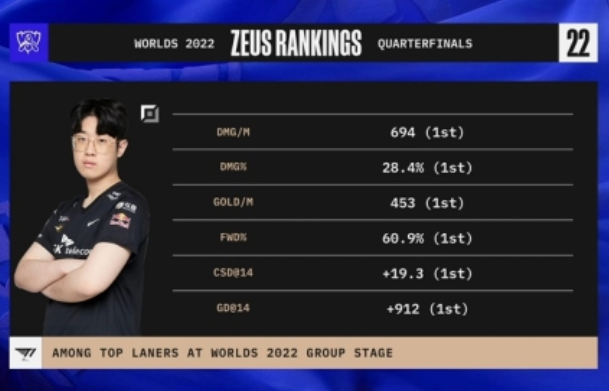 Zeus, MVP to the quarterfinals of the LOL World Cup

Zeus (real name Choi Woo-je 18) was selected as the best professional gamer in the 2022 League of Legends World Championship (LOL World Cup) group stage and semi-finals. The tournament has been underway in the U.S. since Oct. 8, following Mexico’s Play-In (final preliminary round) from Sept. 30 to Oct. 5.

Spanish e-sports media “Esportmaniacos” said, “Zeus received the most attention as SK Telecom CST1 beat Royal Never Give Up (China) 3-0 in the set score and advanced to the semifinals of the LOL World Cup.” He is the most dominant player in this tournament.” T1 will play against Jingdong in the semifinals on the 30th.

This year’s T1 has something in common: League of Legends Korea’s first division LCK, and Royal Never Give Up is a game team that won spring competitions side by side in China’s top stage LPL. “Zeus makes the opponent scared and nervous in the 2022 LOL World Cup,” said Esportmaniacos. “Royal Never Give Up also planned to avoid head-to-head matches,” he stressed.

“Royal Never Give Up aimed to create a situation in which Zeus had no choice but to step back,” said Esportmaniacos, who analyzed, “This strategy is not surprising.” “Because Zeus was the best in the world in the LOL World Cup group stage.”

In May, the two teams faced off in the final of the “Mid-Season Invitational (MSI)”, the world tournament after the LOL World Cup. At that time, Royal Never Give Up won and T1 finished second.

“Esportmania Course” said, “22 is the first year of a professional gamer that Zeus plays as a complete starting pitcher,” admiring how fast it is to grow to become the most feared presence in T1 through this LOL World Cup.

“Esportmaniacos,” which explained Zeus’s consecutive selection as the best five in this year’s LCK spring and summer tournaments, summarized it as “the top player who plays ideal,” and expected, “We will determine who is currently the best player in the League of Legends in the LOL World Cup semifinals.” 369 was selected as the best five for contributing to Jingdong’s victory in the 2022 LPL Summer Games.